It’s been quite a while since I posted anything on here because I’ve been spending most of my spare time on my little project (www.farmeramaaid.com) but I had to blip back here just to share this with you.

American TV viewers may have seen it before, but it still deserves another airing.

I haven’t been on here for a while because I’ve been concentrating on another project, but I came back to the old “HN” today because I wanted to comment on a blogging friend’s latest post.
After that I thought I’d refresh my memory about what some of my more recent posts had been about, (“Recent!? That’s a laugh!”), and I watched the Youtube video again in the post “It’s not the words, it’s what you do with them“.
When the video finished Youtube brought up some alternatives for me to view, as it does, and I watched this one.
Being someone who has been hit by a car who’s driver wasn’t paying full attention I found it quite moving. But most of all I liked the message at the end of it.
I hope when you see someone driving like an idiot you too will wave the little finger!

It’s all Double-Dutch to me

Amanda will occasionally tease me by “cursing” me in Chinese. This I accept.
But this evening, in the kitchen, she muttered something that I didn’t understand and when I asked her what she had said her reply was “Oh, it’s ok… Not even Mandarin speakers would have understood that. It was in my local dialect.”
What ?!
My few words of Mandarin, (my name, “Nihao”, and about five items of food), don’t stand a chance of helping me to understand her when she’s blabbering in Mandarin, but now I’m expected not to understand her in some strange dialect too !
That woman expects too much of me. 😦

Why did you stop playing Farmerama ?

Just lately I’ve noticed a lot of my Farmerama neighbours have stopped playing the game, even some of the older, really keen players.
I know there may be a zillion reasons for this but it seems to happen in batches; I get a nice settled bunch of neighbours and then about a quarter of them will stop playing all at around the same time.
If you’re an ex-Farmerama player I’d be interested to know what prompted you to leave.
Thanks.

The lessons we learn without realising it

For the second time in only a few days I find myself inspired to put fingers to keyboard by Cheri’s blog.
Today’s post (Planting Seeds) relates to the sowing of wisdom into the minds of the young.
In Cheri’s case she is talking about making a difference to children’s lives by showing them ways that they can think about starting their own businesses, but the same could be said about everything that we try to instill into the young; good manners, a sense of respect, the difference between right and wrong. We may not see the fruits immediately but we have laid the seeds and can do no more than that, except perhaps the occasional watering.
I always remember an old school master from my senior school who I just did not get while I was at school. The two of us seemed to have an unspoken understanding about this which actually helped us to have a rather humourous, and sometimes comical, master/pupil relationship.
Over the years things happened in my life and situations occurred where I found that I already had some unseen, inside knowledge of how to react to events, how to behave, or what was expected of me. From somewhere in my early twenties onwards I began to realise where this knowledge had come from and grew to have a deep and lasting respect for him and all that he had taught me (except for the Latin, which never stuck).
I knew where he lived and at one point, long after he had retired and when my career was at it’s peak, I even felt that I would like to visit him and relay my gratitude but, alas, never got around to it before I heard that he had passed away.
S. G. Timms, I may not remember much Latin but you taught me a lot. Thank you.

Actually it’s 204 because there’s the island as well (Bahamarama), but I’m not really into that, mainly because I think it should have its own market and be totally separate from the mainland farms.

Now Tara, my daughter, wants me to take over one of her farms for her for a couple of weeks while she moves house… I’m not looking forward to that. 😦

Must dash… have crops waiting…

Google, the Japan earthquake and the tsunami

Congratulations Google !
I have Google as my Home Page and this morning, as usual, I started up the internet and clicked on the first shortcut to start doing what I was going to do.
Double-Take !
As the login screen for my farms appeared I thought to myself, “Did I just see that ?”. A quick click on the Back button confirmed that I had…

My eye had caught the wording in red… “Tsunami Alert”.
I am not in the habit of putting the radio or TV on in the morning so if I were in a remote area likely to be affected by the tsunami I would have had no warning.
I would also have had no warning if my home page were, for example, Altavista or Ask.
If I have one, slight criticism it would be that the words “Tsumani Alert” should be in large letters so that the message is as wide as the text input box, but that’s just being picky.
This is good, responsible use of the internet and Google are to be commended.
Our thoughts and prayers are with all those affected by the earthquake and the tsunami today.

Just to show that I’m not an old stick-in-the-mud and to prove that I can move with the times, I sent an anonymous Valentine Card… by email !

I thought the mixing of the languages on the signs in the shopping mall was cool.
It’s strange but even without knowing the Chinese character I always read it as if in English without realising it.
Have a good Year of the Rabbit.

So having played around with the various farming and restaurant elements on QQ, (all in Chinese 😆 ), I decided I wanted to try setting up a restaurant of my own on there. None of the attached farms and factories, just the restaurant element.

Why ?  Because that’s the bit that has the design element as well, and I love playing around with that part of it. (See later, below)

Eventually Amanda set me up with my own ID and a starter restaurant. Well, what else could I call it ?… 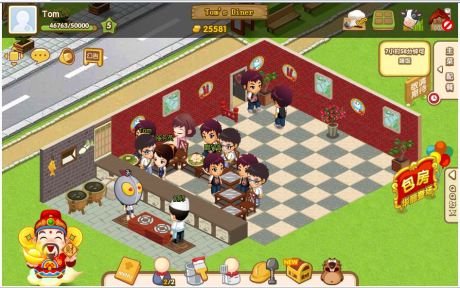 Tom's Diner (Click for full size picture if you want)

That’s me having a quiet word in the waitress’s ear, and Amanda doing the cooking with a silly mask on.

It’s only very basic at the moment (because it’s only been open 36 hours), but from little acorns etc. etc.

Eventually the plan will be to have something like Amanda’s (design by yours truly), but that’s a couple of months down the road yet.

As you can see, although all the restaurants are actually on just one level I’ve been playing around with the perspective effects you can achieve by careful utilisation of the available pieces. Click on the pic for a full screen version to get the full effect. I’ve actually seen designs that appear to have four different levels on a board of about the same size as Amanda’s, although whether they work particularly well from a gameplay point of view is probably another matter. (Reminder to self: Must have a word to Amanda about that cleaner ! )

I’m also working on field designs within Farmerama, although the recent Alien Visit challenge forced me to temporarily abandon what I was working on there in favour of making a tidy profit on the Cow market. 😀

Such a busy life….