Right, that’s it. Either that hamster starts paying rent or she goes !

While the wife’s away…. 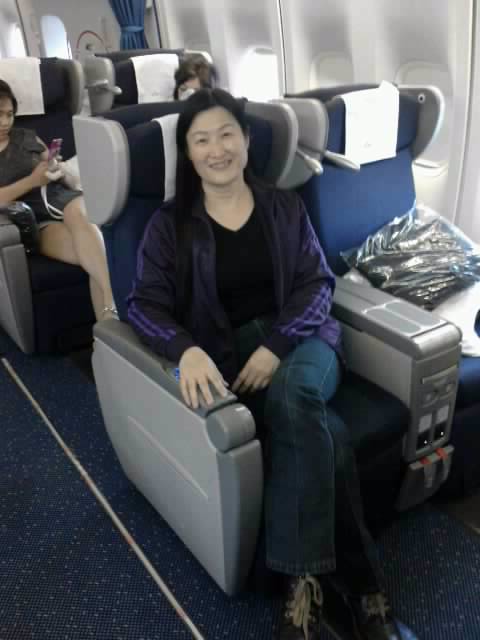 Amanda has had to go back to Nanning for a month to see the family. Her Dad’s not well and has been asking her to go back so now is the best time as she has found a part-time job in a care home which she should start about a month from now once the disclosure paperwork has gone through.
When we were online checking her in for her flights we were picking her seats and I spotted an available seat where I wouldn’t have expected one to be offered for her.
Not giving her the chance to say that she would prefer her “normal seat” (window, just by the middle exit) I said to her “Oh, there’s a good one, grab that !”. As it was late at night and she’d had a long day she was in no mood to put up much of a struggle so the deed was done.
She was more than pleasantly surprised when she boarded the flight at Schiphol, and had to check with the cabin crew two or three times that a mistake hadn’t been made.
I just got a call from her in Chengdu and she says she slept all the way. That’s the first time ever! Given how busy she has been over the past week and how tired she was when I left her at the airport in Edinburgh I’m so glad it worked out that way for her.
It’s also the first time I’ve ever been able to get an upgrade for anybody, despite years of trying, so I’m pretty happy about that too.
Now, while the wife’s away, I’m hoping to be able to get around to a few blog posts that I’ve been meaning to do for a while. They’ll be somewhat varied so there should be something for everyone. 😉

Starting the day with a laugh

There is a small group of blogs that I subscribe to and I woke up this morning to two new posts that had an effect on me.
One I will be contacting the author directly for further useful information.
The other is worth pointing my readers at because I’m still laughing now. If ever a post by one of my friends warranted hitting the Freshly Pressed board it’s this one.
Thanks for the laugh, Cheri. 🙂

Yes, it’s time to come clean about why I haven’t been blogging much lately.  Blame Amanda. (!)

I used to watch from a distance as colleagues at work messed around during their lunch breaks carefully tending their Facebook Farms. Occasionally I would enquire, “How’s your Coo’s ?”, but given my total dislike of Facebook that’s about as far as it went… until Amanda revealed the amount of time she spent playing with the farming game on QQ, which is like a Chinese version of Facebook. (Yuk !!!)

However, with her spending so much time on it I thought to myself, “I might take a look and see if there’s another free, non-Facebook, English language farming game that I like the look of, just to see what the fascination is.”

I have now been farming for two and a half months.  I have three farms on Farmerama (all at around level 50), have spreadsheets tabulating information about crops, trees, animals and their relative benefits with regard to cash and experience points, neighbours and their complete gift histories, etc., etc..  If you want to know which is the best crop to plant at any particular time of the day (or night) in order to take best advantage of the various challenges that might be on offer, just give me a call !

And, I’ve been given control of one of Amanda’s QQ farms (with its associated restaurant, crops and animals) along with monitoring her and her nephew’s similar “businesses”.

It certainly helps to pass the time, that’s for sure.  Constant calls of “Go to John’s animals…”, “You have angry customers…”, “You can take my Rice in ten minutes…”, interspersed with “Haha… I got your Sheep…”, “I can’t, I’m in the middle of something….”, “Oh, I can’t bash any more mozzies today 😦 “, and so on, and so forth.

Well, what’s life for if you can’t have fun together, eh ? 🙄

I’m seriously considering starting a new blog with some “Tips for beginners” for Farmerama-ers, along with pointing out some of the high (and low) lights of it, showing some of my favourite graphics (very often the best part of the game), and such like.

Well that’s on QQ, appears in the animal field, and you get a bonus for shovelling it up…

Must dash, have two fields full of strawberries to harvest…. 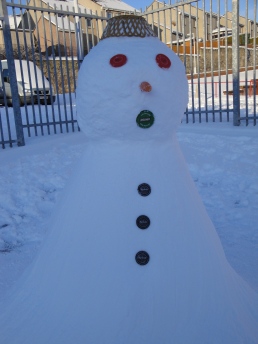 I think I probably made a snowman in the winter of ’63; I know I did make one once when I was a kid.

Amanda has never made a snowman before and, dear little wife that she is, she badgered the living daylights out of me this morning until I finally went out to help her and offer some well needed technical advice. (It’s what us men are for).

There was me thinking that she would just go downstairs and make a little one outside the door, maybe behind my car. But, oh no, over into the car park she went to make as big a one as she could !

I don’t think my back will forgive me this side of Christmas but Amanda’s happy, and that’s what matters.

Oh, and yes, it is called “Frosty the Snowmam“, because that was how Amanda labelled the folder that she uploaded the pictures into. 🙄

Blackberrying on the Fife Coastal Path

Do my delicate bits have “Kick Me” written all over them ?

There goes life again, patiently waiting in the shadows to leap out and kick me right where it hurts.

Amanda moved over here last Friday; I’m “back to the wall” financially at the moment after spending out on her visa (UK Government rip-off), and all the flights, and having just come back from two weeks holiday; we are struggling to find work for her; and then what happens ?

Today we were all laid off at work as the company folded.

I might as well go to a tattooist, drop my pants, spread my legs, and tell him to start writing “Kick Me” all over whatever he finds there.

The company can’t afford to pay us any redundancy money, so there will be about a six week wait for the Government scheme to come up with anything, and that won’t be much.

Amanda is taking it very well at the moment, but with no sign of any income at all for the next few weeks and only enough dosh available to cover food for the next two weeks (no bills, just food), it looks like things are going to get a little tough.

Thanks a bunch, Life, I love you too !

Yesterday I got a call from Amanda saying that a light bulb in the living room had exploded and tripped the main fuse so I had to go home to reset things for her, then last night my printer went kaput just as I needed to print out some very important paperwork (and now I won’t have access to an office printer either).

Now this morning I went to pull the kitchen window closed and the hook came off in my hands, spilling the attachments over an inaccessible part of the roof downstairs just as the kettle developed a leak and will (desperately) need replacing.